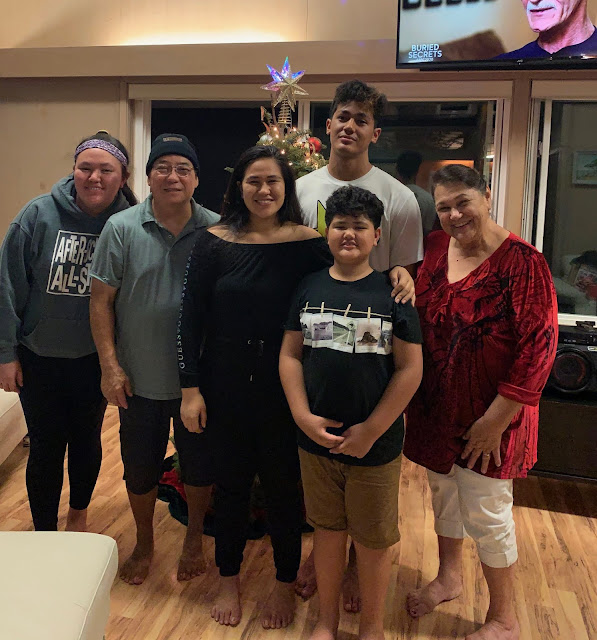 He’s not the loudest of them all, but Tevarua Tafiti knows how to set goals and sell.

The Punahou defensive playmaker has gained eight pounds since the end of football season and now stands at 6 feet, 3 inches and 208 pounds.

“I’m doing a lot of protein shakes. I take a protein shake from Costco. I add turmeric and vegetable stuff. The first time my mom put turmeric in my drink, I said what is this? I like vanilla because I can mix stuff in,” Tafiti said.

Hawaii, Utah and, as of Monday, Washington, have made scholarship offers to the sophomore. Last fall, Tafiti was voted by coaches and media to the Star-Advertiser All-State squad as a defensive end, the only 10th grader on the first team.

The catch-22 for sophomores and freshmen, Tafiti noted, is that college coaches aren’t permitted to make initial contact with high school prospects until they begin junior year. So, he took the initiative to reach out to coaches this year and has been reciprocated by recruiters for the most part. Some haven’t responded, but the list of interested programs now include Rutgers, Stanford and USC.

If Tafiti never gets another offer — highly unlikely — he can’t go wrong with the new coaching staff at UH or one of the Pac-12 possibilities.

> Hawaii
“Hawaii was my first. I was super psyched about that one, growing up watching them,” Tafiti said. “I got re-offered by Coach (Jacob) Yoro. I called him.”

When the previous staff departed, Tafiti wasn’t certain about the offer.

“(Teammate) Kahanu (Kia) said the coaches want to talk to you,” he said of the re-offer.

> Utah
“That was surprising. I wasn’t expecting a Pac-12 (offer). Utah, I’m really close to the DL coaches, Coach (Darrin) Paulo and Coach (Sione) Po‘uha. I went to the All-American Combine (in San Antonio), and I met Coach Po‘uha and his son, and we just started talking from there. That’s when Utah played Texas,” he said.

> Washington.
“I’m pretty open. Nobody really has an edge. My options are open right now. I (communicated with) Coach Ikaika (Mahoe) and Coach Bob Gregory, the linebackers coach,” Tafiti said. “I haven’t been there, actually. I met Coach Ikaika in the middle of second quarter. He was visiting someone else, the juniors, Kahanu guys. I got his card. Over this (lockdown), I got all my (coaches) cards and called them. I introduced myself.”

“I know Washington has environmental engineering. Hawaii, too, I think,” he said.

For now, in the midst of the COVID-19 lockdown statewide, Tafiti is getting workouts done when he can. His family doesn’t have the space for a bench press or squat rack, so he took to Twitter with a video, doing lifts with a loaded backpack.

“I have yearbooks and textbooks, things that are heavy, in my backpack. Sometimes, I’ll sneak out to a park with my cleats on. I do a lot of work, drop in coverage, get-offs, the same things I would do at practice, but just me. Mental reps,” Tafiti said. “I’ll go running around the block, do some free weights and pushups.”

“I’m trying to gain weight, but I don’t want to get too big and lose speed,” he said.

The daily grind, of course, is much different now. No 5 a.m. wake-ups. No commute from Waipahu. No pit stop to see Grandma (Winona Lee) after practice.

“I miss her cooking and her cookies, all her baked (goods). And her dogs. That’s the first place I would go. Our whole family would go. We usually go there a lot. She usually picks us up after school and practice,” Tafiti said. “We would chill at her house until our parents finish work at 11 p.m.”

Tafiti has a 3.4 cumulative grade-point average.

“My mom (Traci) and dad (Matthew) always say, stay humble and don’t stop working. Keep working and do good at school,” he said.

Online classes have been a bit of a challenge for Tafiti.

“I kind of like it. I kind of don’t. Time management is important. You could go in your bed and sleep,” he said. “My grades are the same (online). Punahou, they have lots of help. They give us a syllabus and when our teachers’ office hours are open. If you need help, they have a one-on-one talk, kind of like FaceTime. They’re in dress code and all the meetings are recorded. I’ve been pretty good with it right now.”

When Tafiti is done with classes and homework, he studies his other career. His future in football is possibly as a hybrid who can play defensive end and outside linebacker.

“All the coaches like how I can play all over. Off the edge, drop and play outside and a little bit of safety. I think safety is less fun. I like rushing off the edge. It’s pretty fun,” he said.

Then there’s the next level and beyond. Studying the best is a source of inspiration.

“NFL, I like Nick Bosa of the (San Francisco) 49ers. He’s quick. I just watch his highlights. He doesn’t have length, but I like how he uses his hands and his get-off is quick,” Tafiti said. “In college, Chase Young. I kind of like the edge-rusher guys. He’s super lengthy and he’s quick. I watch his film and sometimes he drops. I think he’s going to be better than the Bosas. I think his rookie year is going to be a good year for him. I wonder what team he’s going to.”

Young is expected to go early in the upcoming NFL draft.

“If I had the first pick,I think I’d take Chase Young. He’s just that good. There’s something about him. If you pass on him, you’ll regret it. He gained 10 pounds in the offseason before his junior year (in high school), I think. His high school tape, he was naturally strong, but then he got huge,” Tafiti said.

His father, Matthew, played for Waianae.

“We live in Waipahu now. I’m actually from Kauai. We moved here when I was in fourth grade,” Tafiti said. “I miss Kauai. We lived in a small town, Lihue, no traffic. My grandpa and my cousins live there. The last time I went back was a couple of months ago, but it was bad timing. I went back for a funeral. So many things have changed. They built new malls.”

One of his dreams is to live on both islands.

“If I could, I’d build a house on the North Shore, and rebuild the house we used to live in on Kauai. Maybe summers go to Kauai,” he said.

“I watch a show called Community. It’s kind of weird. I like Greater, a football movie about the Arkansas Razorbacks. I started watching Tiger King. It’s just weird and funny,” Tafiti said. “I might watch Black Lightning next.”

For now, with his parents at work all day, Tafiti does his chores, works out and eats.

“I miss my grandma’s Portuguese bean soup. I like that, it’s super good. At home, I like my dad’s shoyu chicken. I like the soupy kind. You can put sauce on your rice,” said Tafiti, who leaves the cooking to his younger brother, Tautua, a fourth-grader. “I can’t cook it, but my younger brother can make it if i guide him a little bit. I’m the wash-the-dishes, take-out-the-trash guy.” 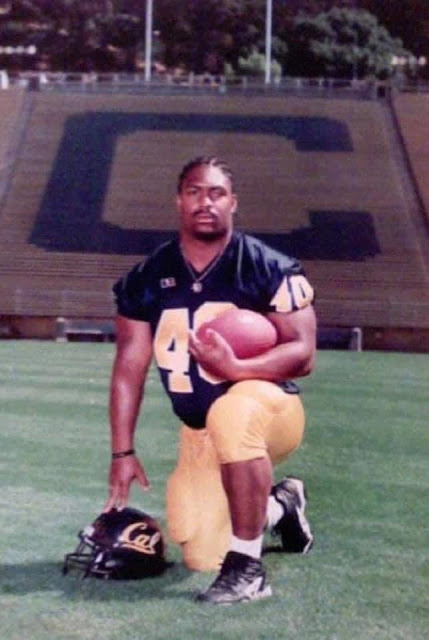 'He touched many lives': Legacy of Zeus White, 43, lives on

Josh "Zeus" White played at Cal after starring at Farrington (Update: Adds more social media responses.) The news on Tuesday morning on social media was not believable at first: former Farrington and Cal running back Josh "Zeus" White had died. White, 43, had moved back to Hawaii with his family in recent years after living in Texas for many years. His oldest son, Josh, played offensive line at Saint Louis. The sad news spread quickly in the football community. "He touched a lot of lives," said his brother-in-law, former Hawaii player Moe Roe said on Wednesday. White is survived by his wife, Ginger, four children and three grandchildren. Former Farrington running back and head coach Randall Okimoto preceded White by a few years. "That is so, so young. The last time I saw him was in our (OIA) championship game in 2016. He came on the field and was on our sideline. He just wanted to help and be encouraging. Wow, that was so unexpected. 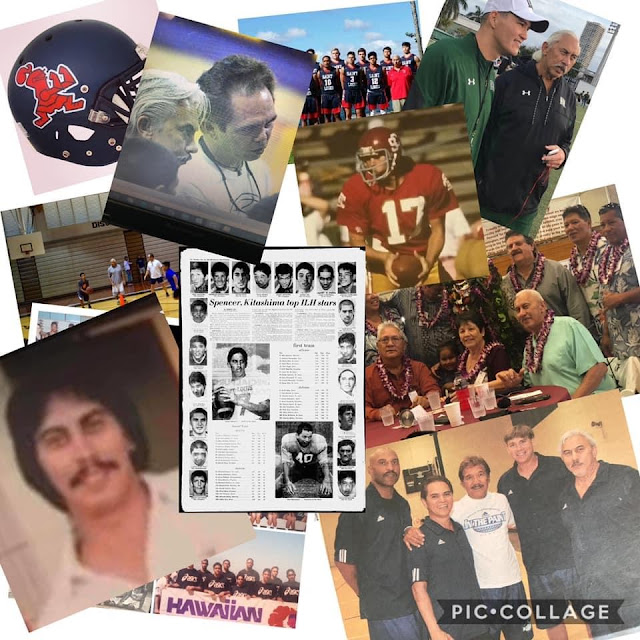 Photo collage courtesy of Coach Sol Batoon (Adds Kale Ane's thoughts, 3:50 p.m.) (Adds Nate Dudoit and George Wolfe response, 6:15 p.m.) (Adds Bill O’Rear, 5/2, 6 a.m.) (Adds Curtis Murayama, 5/3, 8:25 a.m.) (Adds Kalei Emeliano, 5/3, 8:45 a.m.) (Adds Kehau Enos, 5/3, 2:45 p.m.) There are few names from the history of Hawaii high school sports lore with more recognitiona and prestige than Kaipo Spencer. The multi-sport star at Saint Louis, who later coached the Crusaders basketball team to a state title in 1986, died on Thursday.  Spencer was an ILH all-star in 1970, named Back of the Year while his coach, Ron Marciel, was selected Coach of the Year. Jim Easterwood of the Honolulu Star-Bulletin wrote: “Spencer, a 6-0, 190-pounder, is probably the top passer of the decade — certainly his aerial wizardry will get him at least a second-team berth in the national pickings.” Spencer went on to play at Santa Clara.  The outpouring of l 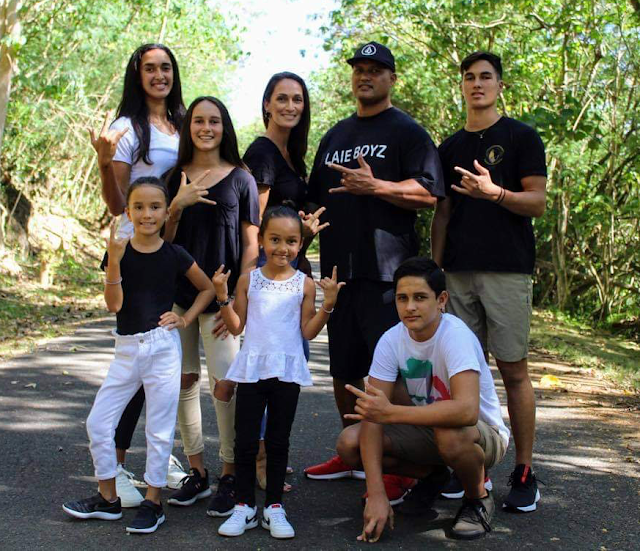 From one generation to the next, the Fonoimoana ohana  enjoys  success in academics  and athletics. Back, from left: Mary, Janeane, Rebekah (mother), Vic (father), Brock.  Front: Eve, Laie and Max.  There is a reason Mary Fonoimoana has a 4.0 grade-point average.   “I feel like sports motivate me to do better in school,” the Kahuku volleyball standout said.   Fonoimoana committed to play volleyball at Nevada last week. She plans to continue playing her second sport, basketball, if and when the abbreviated sports season begins in January. The 6-foot senior also has offers from New Mexico State, New Mexico, Dixie State, Eastern Washington and Fairfield.   At Nevada, she is expected to play in the middle. “But if they think I can do more outside, I would redshirt and play on the pin,” Fonoimoana said.   The connection with Nevada started e-mails to the Wolf Pack staff, including head coach Lee Nelson.   “They emailed me after we had these combines here in Hawaii and a tournament on the ma